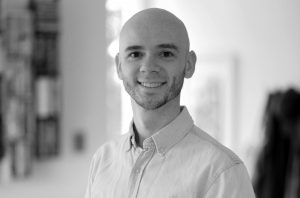 David grew up catching frogs, chopping wood and trying to fit in as a caucasian kid in the countryside of Japan. He moved to the US at 15 and later followed his photographic passion to Brooks Institute of Photography where he studied film and video production. Since then David has directed commercials and webseries, winning the Big Vision Empty Wallet award from Atomfilm for the comedy “Onstar Parody”, has taught filmmaking workshops in Japan for New York Film Academy and interpreted for various filmmakers and artists in Los Angeles including David Lee Roth, Lady Gaga and Rob Cohen.

David traveled to Japan to be the Tokyo unit line producer of documentary film “The People VS George Lucas,” and worked along director Takashi Shimizu (“The Grudge”) as an interpreter for CBS Films’ “7500”. David went on to direct a series of YouTube short films, including “What Kind of Asian Are You?” in 2013 which now has over 8 million views and is used as part of high school curriculum in over 5 countries. The short film he directed in 2014, “Augustine” won Best Short Horror at Calgary Horror Con. David now continues to hone his craft as a visual story teller through assistant directing feature films, TV, and commercials. And he still catches frogs.